This site doesn't support Internet Explorer. Please use a modern browser like Chrome, Firefox or Edge.

Sis, You Are The Cake

SOME TIME AGO, I was deeply depressed with how my life was going and I felt trapped because of some of the previous decisions and consequences I had to deal with.

I knew deep down there had to be more to life than my boring, mundane existence called “life,” which consisted of going to a mundane job with no potential or living the kind of lifestyle I desired. Can you relate?

To make a long story short, sis, I broke free of life’s blocks and mental barriers that were holding me back. Inside, I share with you exactly how I did it.

GET THE BOOK (PAPERBACK)

GET THE E-BOOK (KINDLE)

FREE on KindleUnlimited or pay just $2.99 to own it.

LISTEN TO THE AUDIO BOOK

SUBSCRIBE to my FREE YouTube Channel and listen to the audio book for FREE on any device!

Take a quick peek inside this amazing book of life-inspired advice and wisdom.
Then, order the paperback to be delivered to your home/office.

Below, you can see exactly what's inside my book, Sis, You Are The Cake!

MESSAGE FROM THE AUTHOR

Preparing For A Sweet Life

Yes, You Can Have Your Cake & Eat it Too!

Hey Sis, Let Go Of The Past!

You Only Get Back What You Put In

There’s Power In Laying Low & Keeping Your Plans To Yourself

The More Consistent You Are, The Sweeter Life Becomes

Sugar & A Whole Lot of Spice

Criticism Simply Adds A Little Flavor To Your Recipe

Sis, Hush For A Minute

Live, Laugh & Be Thankful For Sprinkles!

Help Yourself To Something Sweet

Make Up Your Mind, Honey 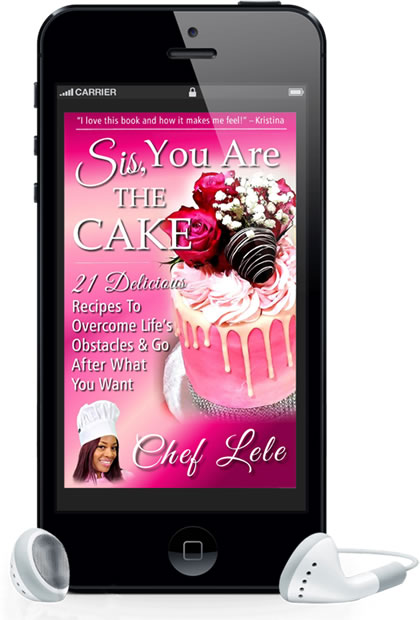 Currently, I'm in the process of recording the book so you can listen to it wherever you go. Soon, I'll provide samples for you to listen to. I can't wait to hear what you think about the audio version of the book. Stay tuned!

“I just love how this book makes me feel after reading it. Chef Lele covers so many topics that really hit home with me. I can relate to what she went through in a lot of ways. Knowing how she came out of what she had experienced gives me hope that I too, one day, can overcome my hurdles and achieve anything I set my mind to. Thanks, Chef Lele, for writing this book. I'm going to read it several times to be sure I pick up every one of your tips and suggestions inside. Bless you!” — Kristina H., GA

“I've known Chef Lele for a very long time. I've seen her go from where she was at, as she describes inside her book, to where she is today. Let me tell you, she is a walking inspiration to all of us women. If she can do it, knowing what she's been through, then anyone can overcome, triumph and win in their own life. Thank you, Chef Lele, for showing us the way. You're an inspiration to us all." — Lala, Riverside, CA

Sis, you are one decision away from a totally different life! Check this out ... About two years ago, I was living a completely different life. You see, I wasn’t living my purpose or doing what I love to do most, which was creating hundreds of smiles from the beautiful cakes I make.

On the contrary, I was a single parent living in Georgia and just barely getting by. At that time, I was deeply depressed with how my life was going and I felt trapped because of some of the previous decisions and consequences which I had to deal with.

I knew deep down there had to be more to life than my boring, mundane existence called “life,” which consisted of going to a mundane job with no potential or a lifestyle I desired. I wanted to be able to offer my children more. Who wouldn’t? I felt trapped with so few options and little money in my pocket. Can you relate? Rather than sitting around crying about how, “life’s not fair,” and “why me” B.S., I decided to muster up the courage and take a giant leap of faith and go after what I envisioned for my life and my children; instead of just settling for less. This bold step would take me completely out of my comfort zone, and, in fact, over 2,000 miles outside of my comfort zone. In doing so, I would endure numerous, painful sacrifices, some of which I’ll share with you in this book.

Now, why did I write this book? I wrote it because, all too often, I’ve seen other women, like myself, living unsatisfying lives because of the stigma society puts on women. You know the whole “put everyone else’s needs first” mindset. By doing this, it adds even more weight and responsibility on the shoulders of the woman, and, sadly, this has become the norm for so many women.

Now, whether you are a single woman with children, single, or married, women have been programmed from a young age to believe it’s selfish to think of herself and her needs FIRST. However, this is unacceptable because, after all, you can’t pour from an empty cup. Right? It’s unbelievable the number of women who are just getting by, living on scraps, and who don’t even know how to act on their own VALUE/WORTH. Why? Maybe it’s because not only do others devalue them, but they devalue themselves, and “THAT AIN’T RIGHT!!!”

Even worse, statistics tell us that single motherhood has become so commonplace in the U.S. and that 80 percent of single-parent families today are headed by mothers and nearly one-third of them are living in absolute poverty. 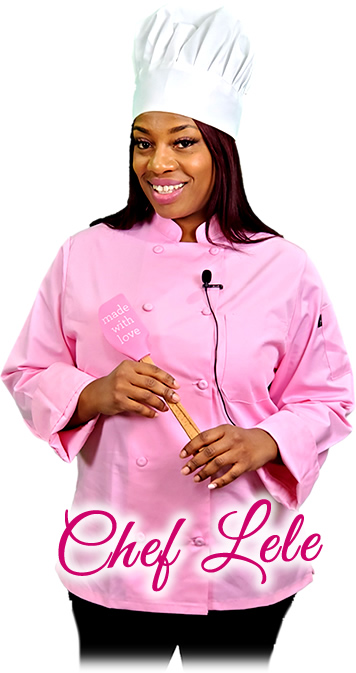 All I can say is, sis, “THAT AIN’T RIGHT!!!” That means that most WOMEN are the sole breadwinners and live in poverty with little hope of fulfilling their dreams of a better life. That is unless she decides “enough is enough” and makes a move to do something about it for her sake and her children.

After experiencing some of this first hand and overcoming this vicious cycle myself, I decided I wanted to do something about this by encouraging every woman (whether you’re a single mom or not) who has ever struggled to live out her wildest dreams to know it’s okay to become the best version of herself and it’s okay to live your life out loud and proud!

Sis, you do NOT have to conform to what society or anyone else has conditioned you to do. Did society issue you their edicts to you in writing? No? Then, they have no say in what you do with your life. Period. End of story. Move on, sis!

Within the pages of this book, I will share with you some of my personal “sweet tips” about life, living it, and going after what you want from the many lessons I’ve learned so you too can have your cake and eat it!

So, kick up your heels and relax a little while we continue to learn and grow together from what I have to share. Use what you like and apply what resonates with you because I can assure you that it’s worked for me.

I’ve taken more than a few wrong turns in my life, as this book talks about some of them, and yet somehow I’ve managed to turn things around and now I live a life that I’m super proud of! So, take it from me, no matter how messy life may seem, there are sweeter days ahead!

If you’re trapped in your own vicious cycle, which we all call life, if what I write sounds like you and you want to do something about it, then I encourage you to use this book as your personal, secret blueprint in planning your escape towards getting everything you want out of YOUR LIFE!